After reading various war poems, my elder child suggested it would be a great idea to write our own poetry. To support the creative enthusiasm, I tried to model a poem for them. I aimed for something with simple language, yet with a flavour of wartime poetry. My elder child flatly said, “It’s about a dead person.” I guess they were underwhelmed! However, they duly pointed out the rhyming words and the stanza that indicates the “dead person”.

We also had another look at In Flanders Fields by Dr John McCrae. We noted that only some lines rhymed, not all lines are the same length, and the phrase “in Flanders Fields” is repeated twice.

Weep not for me;
That time has passed.
Dreams of home,
Of love that lasts.

Weep not for me;
I’m not alone,
Lost in fear
Or darkness known.

For I am gone;
I’ve passed away,
Beyond reach
Of Mortal Man.

Yet you remain,
And you will stay.
Weep for you;
I’m glad you can.

I don’t know how inspiring it was but they duly wrote their own poems. (We tried some freestyle poetry but opted for acrostic frames, in the end: Remember Acrostic Poem and Poppy Acrostic Poem.) My younger child wrote about war, and my elder child wrote about peace. (I found the contrast very interesting.) I’m really proud of their efforts, as poetry is not something they normally attempt. Despite the topic, this has truly been a bright point today. 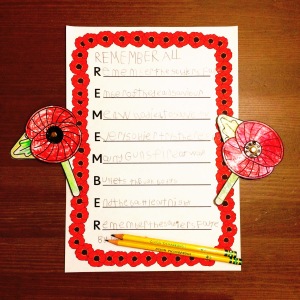 Peace is cool.
Our future is peaceful.
Perhaps, we will be peaceful forever.
Plant food and share it.
You can change the world. 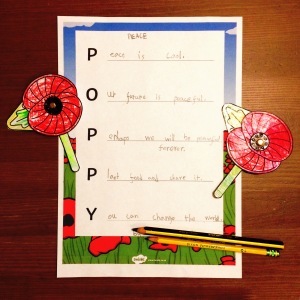 Day in the Life

This site uses Akismet to reduce spam. Learn how your comment data is processed.

Theme by Anders Noren — Up ↑